As part of the All Saint's Wake (Halloween) event this year, FFXIV added an interesting small piece of content: a haunted house.

It's essentially a non-combat dungeon for four people join of any class or level. (Well, I think you need to be level 15 to participate in the event.) SE reused one of the spookier dungeons, Haukke Manor. But instead of the normal mobs, they have patrolling monsters. You have to sneak behind them. The party has a combined sanity meter. If a patrol spots you, they turn you into a pumpkin and reduce the group's sanity by a bit. 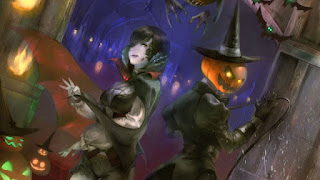 The group has to complete 3 challenges before time runs out (30 minutes) or they lose all their sanity. The challenges are random, and selected from a pool. They are fairly simple, and mostly an excuse to send the players searching around the manor. One challenge is that four rooms in the manor have magical circles, and each player has to stand in a circle. Another challenge requires you to collect 15 cookies from the different rooms. A third challenge has chests in all the rooms, with most chests trapped. But there are clues which point you to the correct room, and the party has to work together to call out clues and cover the floors.

It's a relatively simple piece of content, but it's fun. It's a nice change of pace from a combat dungeon. It's also an interesting feature to have the group split up to cover different areas of the manor. Reusing Haukke Manor is clever, as it's a nice callback to a "spooky" dungeon, and very thematically appropriate.

The only loot is the event currency, and if you run the haunted house three times, you'll get enough to buy all the new items. The pacing of the dungeon is also very well done. Ten minutes per challenge, and 100 sanity is enough to make the end a bit tense, especially with new people, but isn't excessively challenging. Though one of my runs finished with 6/100 sanity, and that was a little nerve-racking.

All in all, I think the Haunted House in FFXIV is an excellent and innovative piece of content. I think the community reaction has been quite positive as well. It will be interesting to see in what direction the dev team takes these ideas.
Posted by Rohan at 10:31 PM No comments:

The Old Republic is introducing an interesting new endgame loot system in their next expansion:


First, here are the details on how gearing will work at level 70:


This system reminds me of the loot system in Overwatch. All activities give CXP, and every level you get a loot box. Gear that comes from the loot box is based on your endgame level.

It essentially converts gear into a straight currency system, albeit one with a some randomness in reward. It heavily simplifies the endgame gear system, and unifies it. Now you can do whatever you like, and you'll still earn experience. It prevents content from becoming entirely obsolete once you've out-geared it.

The downside is that some "easy" activity will become optimum for grinding and gaining levels, and then people will insist on doing that non-stop to earn levels. The advantage of harder content giving better gear is that eventually you have to challenge yourself if you want to improve. This system makes it easy to keep from challenging yourself, and contenting yourself with content that you know you can succeed with.

The normal PvE mindset is that quality of reward is intrinsically tied to difficulty of content. I wrote a bit about this a long time ago, though more in the context of PvP versus PvE. (See Raider Perspective on Rewards, and Why Does the Reward System Matter?) I am not certain that breaking this link will be healthy for the game.

The other problem is that reward is now greatly tied to time spent in game. If you play twice as much as someone, you should have twice as many levels, and thus twice the gear and further into the higher level gear. But maybe making this explicit is more fair than current games. And I suppose you can tweak the XP gained to mitigate this. For example, the first time you do a piece of content each week, you get a big bonus to XP, etc.

Still, it looks like an interesting experiment, and it will be interesting to see what sort of effect it has on the game and the players.
Posted by Rohan at 9:10 PM 9 comments:

Legion Raiding as a Holy Paladin

Here are some initial thoughts on raiding as a Holy Paladin.


So far, my initial impression of Holy Paladin healing is that you have to choose between strengthening your strong points of focused tank healing, or trying to shore up your weakness of raid healing.

I started with the focused build, but we were a little healer-light to start, and it felt like the dps died too easily. So I switched talents around to add more raid healing, and that felt a little better. If we had another healer though, I think the focused build would have been better.

Of course, I'm very rusty with raid healing, and we're only a Normal-mode guild at the moment, so keep that in mind.

Any other holy paladins care to share their experiences and tips?
Posted by Rohan at 10:16 PM 8 comments:

FFXIV's latest patch, 3.4, came out this week. I spent the afternoon going through the main story quest.

It was really good. It tied up a lot of loose ends, and set the stage for the next expansion. There were a lot of good moments, especially in the middle. It did get a little complicated near the end. Final Fantasy "theology" has always been a little mind-bending.

One interesting element in the main story was that they sent you back to do an old primal from 2.0. Not a new version of the primal, but literally the old fight. Now, FFXIV does include mechanical reasons to do old fights. They're part of the random duty finder roulettes which give out endgame currency. But this is the first time they've given a story reason to do the old fight.

What was most interesting was that it was the old fight, but if you're on the main story, they changed the dialogue of the primal during the fight to reflect the new situation. It was a really interesting idea, and worked really well. I'm not sure if it's something SE could pull off again, but it worked beautifully in this story.

All in all, the 3.x story was a great one, and I'm looking forward to the next expansion.
Posted by Rohan at 8:15 PM 4 comments: