I was going through Origin: Access looking for a game to play when I came across Vampyr. I like vampire stories, especially ones which focus on the downsides of being a vampire, so I decided to give it a whirl.


I have heard nothing about this game, it seems to have been completely ignored in my circles. This is a shame, as it's actually a really good RPG.

Vampyr is set in London in 1919, just after the World War I and in the middle of the Spanish Flu Epidemic. You play as Dr. Jonathon Reid, a former army surgeon, who is suddenly transformed into a vampire, and is trying to figure out just what happened to him. The first five minutes of the game makes it clear that being a vampire is not a good thing.

Vampyr is a classic RPG. You talk to NPCs (called citizens in the game), earn XP, and spend XP on various vampiric powers. You use weapons (knives, clubs, stakes, and revolvers so far) and can upgrade them, etc. You get "quests" from the citizens. Citizens have secrets which you uncover through conversations and documents. Some of them are ill, and as a doctor, you can create medicines to cure them.

The "special" element in the game is that by far the largest source of XP are the citizens themselves! You can mesmerize them, lead them off out of sight, and feed on them if you choose, killing them. You get the most XP if they are healthy and if you have uncovered all their secrets.

The citizens themselves are excellently written. They all have unique personalities. Some are good people, some are bad, some are mixed. The game is fully voiced, and all the actors do a great job. As normal for me, I'm trying to play without embracing any citizen. However, as I'm playing, I catch myself wondering if anyone would really miss this this unrepentant criminal citizen.

Like all good vampire stories, Vampyr thrives on contradictions. Dr. Reid is a Man of Science transformed into a Creature of Myth. The game encourages you to care for the citizens, to heal them and learn all about them. Then it encourages you to feed on them, as they now give the most XP.

Combat is probably the weakest part of the game. It's serviceable, but it isn't anything to write home about.

So far I'm really enjoying Vampyr. If you're looking for a solid RPG in a unique setting, I strongly recommend it. Hopefully the rest of the game is just as good as these first few hours have been.
Posted by Rohan at 10:13 PM 4 comments:

This post contains some minor spoilers for The Old Republic: Onslaught.


Star Wars: The Old Republic launched its latest expansion last week, Onslaught. This expansion adds a new story, a level cap increase to 75, and some changes to gearing and some cleanup for the UI.

The story in Onslaught is a bit short, probably clocking in at about three hours each for each faction. TOR has gone back to the Empire versus Republic stories, with the Sith Empire launching an attack on a new Correllian shipyard, and various machinations around that. It's very good though, and in many ways is a welcome return to form after the Fallen Empire/Eternal Throne style.

I will say that the loyalist Imperial story is perfect for an Imperial Agent, and I greatly enjoyed it. There are lots of good callbacks to the older story, along with newer NPCs.

There is one weird or interesting thing about Onslaught, which feels different from previous versions. Before, you had:
Now, in Onslaught we have 2 faction stories, but the timeline is not really shared. It's like many similar timelines, but things are unfolding differently in each timeline.

For example, let's take Darth Vowrawn. At the end of Onslaught, he can be:
This is a huge variation in outcomes and story going forward!

And Bioware is doing this for a lot of different elements. I wrote a post once about Story Choices That Constrain the Future. In Onslaught, that doesn't seem to hold anymore, and Bioware is actively committing to making many similar versions of the story, with differences to account for your choices.

It will be really interesting to see how Bioware attempts to deal with this design, and whether they can maintain it going forward. Or if they work towards collapsing some of these timelines back into a single one. For example, they could have another Sith kill Vowrawn and Acina (whichever are still alive), and become the new Emperor, cleaning up those timelines. Which would be kind of sad, as I really like Empress Acina. But she's already dead in some timelines.

In any case, Onslaught is a worthy addition to The Old Republic, and very enjoyable. Hopefully Bioware will be able to produce content faster than they have in the past, and the story continues.
Posted by Rohan at 6:06 PM No comments:

Blizzard responded to the outcry late Friday evening, reducing the suspension to six months. This is a cynical attempt to defuse the community outcry, while desperately trying to stay in the good graces of the Chinese government.

There is one single truth at the heart of this matter: Bliztchung did nothing wrong.

He played fairly. He won the tournament fairly. In an interview after the tournament, where he was only one being interviewed, he expressed support for a political position that was important to him.

There is nothing wrong with this conduct. Indeed, it is even admirable.

There is a long and storied tradition of athletes in our culture espousing political positions, criticizing the government or the state. Blitzchung's actions fit squarely within that tradition.

The issue is not that the punishment was too severe. It's that Bliztchung was punished at all. Punishing admirable conduct is unjust, no matter how you dress it up or point to overly-broad rules.

Blizzard's response is an attempt to mollify the community, while at the same time persuading them that what Blitzchung did was wrong. That criticizing the Chinese state is wrong. Once you agree with that, the degree of punishment is only a detail, one month, six months, a year, a lifetime. The important part is that China and Blizzard have convinced you that criticizing the Chinese state is wrong.

J. Allen Brack and Blizzard are a disgrace to the gaming community and to our society. The Chinese government has ordered them to squelch dissent. Blinded by greed, they have chosen to act as agents of repression. Blizzard has gone past mere trade, and into active collaboration.
Posted by Rohan at 7:40 PM 8 comments:

From /r/wow's summary of events:


Earlier today Blizzard announced that Hearthstone player Blitzchung will be stripped of his price money for "Grandmasters Season 2" and be banned from participating in official Hearthstone tournaments for a year. This is following him proclaiming support for the protests in Hong Kong in a live post-match interview on stream. The two casters conducting the interview were reportedly also fired.

I am deeply disappointed in Blizzard. I don't expect them to support Hong Kong explicitly, or anything like that. Indeed, maybe they don't. But Freedom of Speech--especially in political matters--is the core Enlightenment value, the one from which all the others flow.

Blizzard has decided that preserving access to the Chinese market by appeasing the repressive Chinese government is worth betraying those values. I am disgusted by their spinelessness.

I have cancelled my subscription, and will boycott Blizzard, until such time as they come to their senses and remember who they should be.

For Blitzchung, I repeat his words, the ones which got him banned: 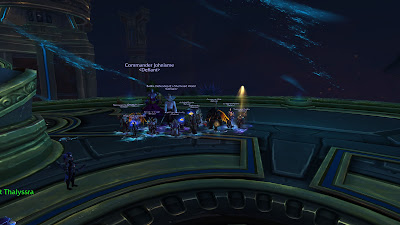 We finally got Heroic Azshara down! It's a pretty good fight. It feels crazily chaotic at first, but as you repeat it, it becomes more and more tractable. A good fight for seeing and mastering phase by phase.

It also feels like a fight where, as individuals get a handle on mechanics, especially decrees, it seems to stabilize for everyone else as well. Decrees are orders from Azshara to soak a mechanic, stay moving, stand still, group up, or be solo. Then you get 2 random ones in heroic. It's very hard at first because everyone is running around like a chicken with their head cut off. But then people start to move predictably, and it becomes easier for people with the more complicated combinations.
Posted by Rohan at 9:04 PM 4 comments:

Posting dropped off a cliff in the last two weeks. Let's see if I can do better this month.

I finished getting the Nazjatar companions up to level 30, and have basically stopped doing Nazjatar. I'm now working on getting the level 3 Azerite Essences from Mechagon.

It's weird, but I like Nazjatar better than Mechagon, but I'm not really too sure why. Possibly because flying in Nazjatar is less annoying than Mechagon. Or possibly Mechagon feels the same every time you go to it. Get chests, kill Rustfeather, do quests in the same area. Nazjatar felt a little bit more varied. Or perhaps it was easier to skip the parts of Nazjatar that you disliked.

Like all of the Alliance, I'm also working on the Bee mount. My current plan is just to kill Honey Smasher and do an event if it pops while I'm in the area once a day until Revered. Then farm for jelly with the item that shows jelly on the minimap.

Raid-wise, we're working on Heroic Azshara. We've mastered the decrees and are working on killing the Phase 3 adds and Phase 4.

I levelled a whole bunch of classes to the level 10 to 15 range. Then for some reason I picked up my rogue and just ran with it. My rogue is level 20 now.

It's interesting playing DPS again. You have no control over the group and since tanks and healers are so rare, you just grin and bear it. Like I did Deadmines, and the healer seemed to be playing a game where he let the tank's health drop to as near zero as possible before getting a heal. Is it really too much to ask for people to just play sensibly?

I do like all the rogue quests that encourage you to use skills like Stealth and Pickpocket. Retail WoW could really use some class quests again.

Heh, perhaps the most shocking change in Classic that I've forgotten is that Sap takes you out of stealth. I used Sap for the first time on one of a large group, hoping to stealth past. Instead I came out of combat and was promptly slaughtered by the rest of the group. Combined with being unable to Sap people in combat, Sap is surprisingly useless in Classic.
Posted by Rohan at 10:25 AM 7 comments: