Actually, it was decided to drop Normal entirely, so we started on Heroic Tuesday. We got through the first 8 bosses fairly smoothly, even with a couple new people on Council and Sludgefist. We even got a few attempts on the Stone Legion, and laid down our strategy.

So tonight we went in focused on them. It took a few pulls, but we killed them after an hour or so. In Heroic at least, it's just a matter of doing all the mechanics, and making sure to clear the various bleeds that you can get.

Then we started doing Sire Denathrius attempts. Phase 1 is very finicky, so it took us quite a while to get that smoothly and start seeing Phase 2. On the last attempt of the night, we had a very clean pull, and ended up pushing him into Phase 3. Three-quarters of the raid was dead at that point, though, and the rest followed shortly.

Still, quite good progress. A couple more weeks of practice, and we should get him down.

Magic: the Gathering is introducing "Universes Beyond", a new initiative to go heavily into cross-overs with other franchises. The first new products will be Warhammer 40k and Lord of the Rings.

Such cards will be mechanically unique, look exactly like regular Magic cards and will be tournament-legal, at least in the non-rotating formats. Wizards did this last year with a special package of 5 cards from the television show The Walking Dead.

Needless to say, the enfranchised fans on in the internet are not happy.

I don't know, maybe it will work out for Wizards. Maybe they'll get more new people to buy in on the strength of the external IP, and most enfranchised players will stick with it.

Personally, though, this feels to me like the moment Magic jumps the shark.

A funny comic from Cardboard Crack: 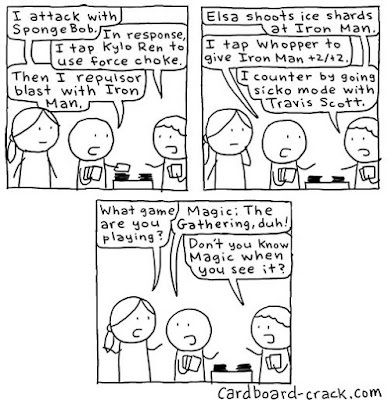