I did play a little of Overwatch 2 when it launched. It's been a long while since I played Overwatch, well before role locks.
I have mixed feelings about the role locks. I pretty much ended playing as a support in all of my games. I kind of feel bad about playing a DPS or tank, and then playing poorly. At least support fewer people want to play.
5v5 is interesting as well. It feels faster-paced than 6v6. I also liked the new Push mode where you have a robot pushing something on both sides of the map. It's a very nice visual representation of progress, especially when you have a game where the robot is flipping from side to side a lot.
Of course, the main topic around Overwatch these days is monetization. Overwatch 2 basically flips the monetization model on its head from Overwatch 1. Overwatch 1 was basically "buy-the-box, earn loot, optionally purchase more loot". Overwatch 2 is "game is free, but you have to buy battle-passes and purchase cosmetics". Probably the various laws against lootboxes from Europe also played a part in this decision. Theoretically you can earn some stuff by playing, but you have to play quite a bit.
To be honest, I think Overwatch 2 should have gone all in. Don't offer the theoretical path, just expect people to pay. Free players get nothing other than the base game, and new heroes only after the season ends. I think that would have at least ended most of the arguments in the community. Rather than the current state where half the community complains about it being too difficult to "earn" rewards, but doesn't want to pay for anything.
I don't know. I'm just tired of people who play for free whining that the game company isn't catering to them enough. Tired of incessant monetization arguments everywhere you look in the game community.
Posted by Rohan at 7:15 PM No comments:

So I haven't been writing much lately. I also haven't been playing much either. I haven't bought Dragonflight, or even logged in since the pre-patch. No Jellycat or whatever for me.

I don't know if I will either. Shadowlands was really, really bad story-wise. Mechanically, I thought it was okay, but I think that opinion is out of step with the rest of the community. So I'm not excited in the least for Dragonflight.

Perhaps the real issue is my guild. I like my guild and the people in it. But since I moved to the East coast, I can't really raid with them. I guess I'm not looking forward to trying to find a new guild either.

Or I don't know. I haven't really played any other games in this drought. I got a new job about six months ago, and I think that is taking a lot of my mental energy, though not really my time.

Are you excited for Dragonflight?

They'll generate a small story and graphic from your armoury and achievements. 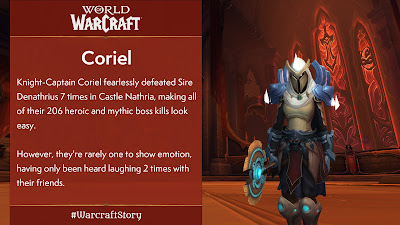 It's a pretty nice use of Twitter and social media. Almost perfectly suited for the medium. Well done by the devs and community team.