There have been some interesting developments in hit rating theorycraft since I posted my list of caps. According to this Elitist Jerks thread, miss rates are actually slightly higher than previously believed. The ranged/2H/specials miss rate is now thought to be 9% against raid bosses, and the dual-wield miss rate is 28%.

I'm inclined to believe these new numbers. Besides the evidence from experiments, this setup seems a little cleaner and more logical than the previous setup. I'll have to revise my list of caps slightly.
Posted by Rohan at 2:49 PM 5 comments:

I think my ideal 25-man raid make-up would look like:

Hmm. I'm not really sure about the Protection Paladin. The DPS warrior could act as a 4th tank, but I'd want the third Blessing. Maybe use a Retribution paladin. That would give higher DPS on fights that require less than 4 tanks, but lower DPS on 4-tank fights.

A couple of A'lar attempts last week got me thinking about paladin tanks again. Basically, if I were specced Protection, I would be a much better add tank than a warrior or a druid.

Ironically, this is because I can control the adds from range. Rather than chasing them down and then moving them into position, I could use Righteous Defense and Avenger's Shield to bring them to me. This is an amusing power, considering that paladins are the most melee-centric of all the classes.

The paladin's high, front-loaded threat also allows DPS to burn down adds faster. I don't think most adds deal crushing blows, so you could gear for spelldamage and stamina. Not to mention that we are hands-down the best AoE tank.

However, a paladin tank would still be much worse than a warrior/druid for tanking the main boss, or even building threat as an off-tank. Is being the best add tank enough? Is it worth bringing one paladin tank over a warrior or druid tank?
Posted by Rohan at 3:25 PM 22 comments: 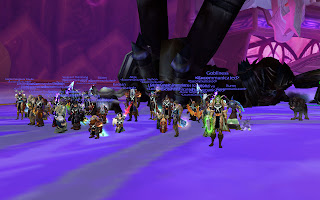 Even though everyone says he's easy, keeping the melee DPS up with paladins was hard. My kingdom for a resto shaman or holy priest on that fight.

I wore my Arcane Resist set, and ran into melee, keeping Judgement of Light up and tossing Flash of Lights. It was very stressful, especially because all the melee are taking damage at the same time. Judgement of Light + Improved Leader of the Pack helped a great deal.
Posted by Rohan at 10:49 PM 9 comments:

Indeed, the few places where race shifts from a cosmetic choice to an impact choice are the points of big debates and much forum angst. The classic examples are Dwarf priests (Fear Ward) and Tauren tanks (+5% health). Here's a point where an expected cosmetic decision actually turned out to be an impact decision, and that causes players to become unhappy.

Making almost all initial choices cosmetic has the big advantage that it's really easy to jump right in and start playing. You don't need to worry about every little thing.

This decision is an interesting one. I'm not entirely sure if it is a good one. On one hand, how you look is kind of the epitome of a cosmetic decision. On the other hand, it means that your appearance is constantly changing as you change gear. And for a MMO which you play for a long time, variety in the character model which is on your screen 99% of the time is a good thing, and can help retain interest.

It also provides a talking point for people. You can't really admire someone's hat, or commiserate with them about its looks, if you can easily change things. If you read the forums, when Blizzard releases images of new armour, especially Tier sets, there's huge buzz and discussion. Would we really have that discussion and interest if we could change the look of our armour?

Not to mention that there's actually a PvP purpose to it. Fixed armour looks provide a signal to your opponent about the quality or type of gear, and a skilled team knows how to take advantage of that.

So making a decision a cosmetic or an impact one is not always obvious. Generally though, if you set an expection that a decision is one type, people will be unhappy if it turns out to be the other type.

[1] A common question on the forums is "Human or Dwarf paladin?" The humans will point out superior racials such as Diplomacy. The dwarves will point out that the humans are pansies who can't hold their liquor. Both sides will walk away thinking they've won the argument.
Posted by Rohan at 10:45 PM 5 comments:

(Coefficient-per-second refers to the amount of +healing from your gear that is applied per second. If a spell has a higher coefficient, it means that there is always a point where it will heal for more than a spell with a lower coefficient.)

However, a downranked Holy Light does have the advantage that it will give you the Light's Grace buff, which can be invaluable when you need to throw a big heal quickly. A two second HL11 can be the difference between a dead tank and a boss kill.

So I decided to try out a macro that casts Flash of Light most of the time, but casts a downranked Holy Light just enough to keep Light's Grace up:

What this does is cast HL5, 5xFoL7, and then repeat. You can play with the number of FoLs and the reset timer to ensure that Light's Grace never drops off. I personally don't constantly spam, so I have the HL5 coming a bit earlier than necessary. You could add a couple of FoLs to squeeze out the maximum effect.

I tried out on Gruul, and it seemed to work reasonably well. It felt a little bit easier to nail the OT with a 2s HL11 right after coming out of a Silence. The majority of our healers are paladins, so the Hateful Strike, Silence, Hateful Strike sequence is a killer near the end of the fight.

[1] Technically, if you bring Blessing of Light into the picture, FoL6 has a lower base heal-per-second than HL4. But FoL6 becomes strictly better at about +900 healing, which is relatively trivial for a raid healer to achieve.
Posted by Rohan at 11:53 PM 17 comments:

In comments to the last post, people are saying that the real problem is that there is a tank shortage. I think the tank shortage could be attributed to raiding requiring extra healers as well.

It seems to be a lot harder to find a tank now than it was for the first few months after TBC. The tanking classes are warriors, druids, and paladins. Maybe raiding requiring more healers is pushing would-be paladin/druid tanks to switch to healing specs, thus reducing the total number of tanks out there.

I'm a case in point. I was Protection for all my TBC levelling and a month or two later. Now I'm Holy. +1 healer for raiding, -1 tank for 5-mans. And I think that this may be a fairly common experience for paladins. How common do you think it would be for people to go the opposite route, from healing to tanking?
Posted by Rohan at 8:04 PM 17 comments:

Why are so Many Healers Required in TBC Raids?

Way back in 2005, in my third post ever written, I predicted that a 10-man would need 2 tanks, 5 dps, and 3 healers. And lo and behold, this prediction came true in TBC. The standard Karazhan make-up is 2 tanks/5 dps/3 healers.

However, my prediction should not have come true! It was based on the assumption that an WoW 1.0 ideal 5-man group was 1 tank/2 dps/1 healer/1 "fifth man" (paladin/shaman), and extrapolated that assumption out to 10-mans. In contrast, a TBC 5-man is 1 tank/3 dps/1 healer.

If we extrapolate that out, a 10-man should be 2/6/2, and a 25-man should be 5/15/5. Immediately we can see that those healer numbers are simply too low. When learning Karazhan you really need 3 healers. It's at the edge of possible with 2, but 3 is ideal. For 25-mans, you need 7-8 healers. My guild tried Gruul with 5 healers last week, and we just couldn't keep the tanks up. A shadow priest respecced and we got him down.

Where are these extra healers supposed to come from? Looking at recruiting posts, everyone is looking for healers.

I think the raid game needs to be balanced for raids with fewer healers. It makes no sense to require proportionally more healers than the previous phase of the game needed. A raid that required 5/15/5 would be far easier to put together, and could be created from five 5-man groups.
Posted by Rohan at 8:20 PM 9 comments:

The Nature of a Paladin

Without resorting to game terms, or specific mechanics, each class can be summed up in an easy-to-understand sentence, which contains the basic nature of the class.

The hunter has a pet animal, and shoots enemies with a bow or gun. The rogue sneaks around, and stabs enemies in the back. The mage blasts enemies with raw elemental or magical power. The warlock summons demons, curses enemies, steals souls, and generally trafficks in all manner of darkness.

When elements of this basic essence of the class disappear from the playstyle, it leads to unhappiness. For example, I believe that hunters are happier now that they can use their pets in instances.

What is the basic nature of the paladin?

The paladin heals her allies, and smites her enemies with a giant hammer.

In raid content, Holy fails this test, but Retribution fails just as badly. Respeccing to a warrior-lite is not enough, but neither is speccing to be a priest-lite. I enjoyed playing a paladin while levelling. Now that I am raiding, I would like to play a paladin as a paladin once again.

Question to Ask at Blizzcon

"In Blizzard's view, where should paladins be in raids: in the melee zone with the rogues and warriors; or in the back with the priests and mages?"

Just give us a straight answer, once and for all.
Posted by Rohan at 1:40 PM 20 comments: