Fall of the Lich King

It took a bit longer than it really should have, but at long last I have defeated the Lich King. 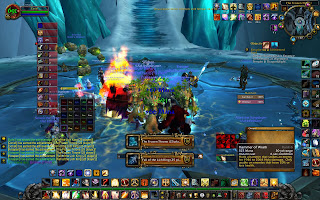 It was the second kill for my guild. The first was two weeks ago. We've had a rough spring, with a fair bit of turnover, but it looks like we're doing much better now. We're 6/12 in Heroics as well.

I really like the Lich King fight. It's hard, and complex. But it also has a lot of the lore woven through the fight, in a manner that's unique in WoW raid fights so far. Blizzard did a really good job of integrating the lore into the fight.

Not to mention that's a great event for paladins, as it features three paladins or former paladins: Arthas, Tirion, and Bolvar.

About the only element I'd quibble with is Defile. Defile is a touch too hard, at least on normal. As well, the stacking buff doesn't really help with Defile. But then again, you could argue that the LK fight is all about Defile, and once your raid masters that, then the fight is 95% won.

This fight is pretty nerve-wracking for a paladin healer. Heavy tank damage plus high mobility is always dicey.

Last but not least, I like the decision to make the last 10% a free-for-all. It was fun as a healer to throw up Seal of Righteousness and start tossing Judgements, Holy Shock and Hammer of Wrath. We even popped Heroism for style.
Posted by Rohan at 11:21 PM