Advice From a Loyal Reader

I was surprised the other day when I logged in and found that I had advice in the mail from a long-time, though anonymous, reader: 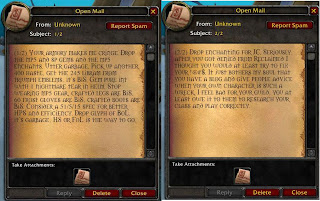 I thought I'd go through this faithful reader's concerns, and talk about my choices about my current gear. (Points slightly rearranged for ease of response.)

Your armory makes me cringe. Drop the MP5 and SP gems and the MP5 enchants. Utter garbage. Gem pure int with 1 Nightmare Tear in the helm.

This is the major point where I differ with what I see as established Holy paladin theorycraft. Most high-end paladins gem, and even enchant, pure intellect. Personally, I like getting socket bonuses, so I use SP/Int, Int, and Int/MP5 gems. So far I haven't had any issues with mana. But if I was to change anything, this would be it.

I'm not really sure what MP5 enchants are being discussed. The only MP5 enchants I have are the faction head/shoulder SP/MP5 ones. As far as I know, MP5 is considered better than crit, so these enchants are the ones to use.

Get the 245 libram from Triumph Emblems. It's BiS.

I use [Libram of Renewal]. My loyal reader suggests using [Libram of Veracity] instead. I am somewhat puzzled by this. The point of gemming full Intellect is to spam Holy Light. Holy Light spam costs a lot of mana, and reducing the cost of HL by 10% is very powerful. Plus HL spam tends to have high overheal, so extra spellpower often just increases your overheal.

These are pretty good suggestions. To be honest, I kind of just take gear as it drops. I don't do 10-mans, though, so I'm relatively behind on badges.

Consider a 51/5/15 spec for better HPS and efficiency.

Drop Glyph of BoL, it's garbage. HS or FoL is the way to go.

I disagree here, Glyph of Beacon of Light is a better choice. It saves a bit of mana, saves a GCD every so often, and most importantly, staggers your BoL and SS refreshes. Taking two GCDs in a row to refresh buffs is a long time between heals. As for the other two, HL is the spell of choice, so buffing the other two is less valuable. Better to buff the spells you use most often, and Beacon is always up.

My second profession is already Jewelcrafting. Seems kind of silly to drop Enchanting at this point.

Seriously, after you got denied from Reclaimed I thought you would at least try to fix your !@#$. It just bothers my soul that you have a blog and give people advice when your own character is such a wreck. I feel bad for your guild. You at least owe it to them to research your class and play correctly.

Heh, Reclaimed was two years ago. I'm somewhat surprised that someone would remember and consider it important enough to reference. Or take time to look up my armor, make notes, create a character on my server and send me an anonymous mail with advice.

Still, the "bothers my soul" line is a tad over-wrought.

It's always useful to see what better players are doing. Let's take a look at Diamondtear of Paragon.

The immediate difference I see is that Diamondtear gems and enchants pure intellect, and does gear for haste (though she uses the same legs that I do). Otherwise, we use the same faction enchants, use the same libram, and have similar specs and glyphs.
Posted by Rohan at 10:23 PM