Perhaps it's a side-effect of Transmogrification, but Blizzard artists seem to be more willing to make "polarizing" sets with Tier 13. If you look at the reaction to the shaman and mage sets in particular, half the audience is "best set ever!" and the other half is "worst set ever!". 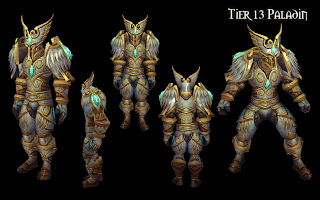 For the paladin set, I rather like it. It's been a while since we got a "knight in shining armor" set. Amusingly, if the paladin pops Avenging Wrath, she will seem to have six wings like a seraph.

I'm not sure I'd put it in the very top tier of paladin sets (T2 and T6) but it's definitely above average, and in the next group of sets.

One other nice thing about Transmogrification is that Ret and Prot paladins will be able to change their boots and belt to match the tier set.

The set bonuses have also been revealed:

I rather like the Holy bonuses. The 2pc is a nice bonus to Divine Favor, especially if you pair it with Holy Radiance. The 4pc boosts one of our big weaknesses, and will be a large help in things like Bethilac's or Ryolith's final phases.
Posted by Rohan at 6:00 PM