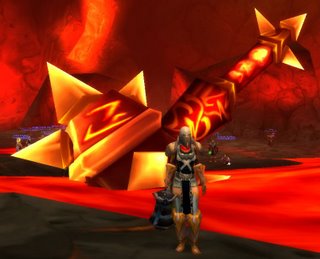 It has taken me over 10 months, over 100 posts, through three different servers, and several guilds, but I have finally killed Ragnaros, the Firelord. He Who Was Ancient When The World Was Young. (I love the 'cutscene' before the fight.)

In the end, I think I did it the best way possible. With a guild who had not killed Ragnaros before. First kills are the sweetest. We did a pretty good job too. 38 people in the raid and we killed him on our second try. It was the third attempt overall for the guild, as we went to have a look after the first Majordomo Executus kill last week.

In a really weird way, it kind of feels like I've beaten the game. I know there's still BWL, AQ40, and Naxx to go, but Ragnaros felt like the end boss of World of Warcraft. Maybe because he's been the goal for so long. Or because I've been so close before, but never actually finished him.

Still, Ragnaros is dead. Bring on the Burning Crusade! (or Blackwing Lair, whichever comes first :)
Posted by Rohan at 9:08 PM