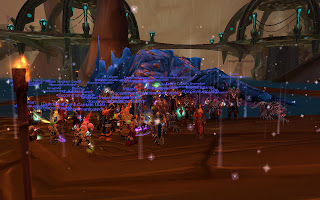 We killed The Lurker Below in Serpentshrine Cavern last night. It's an interesting fight. Basically, Lurker is a giant fish and you fight him on a couple of islands. He does a "spout" which is basically a beam of death. You have to dive underwater when he spouts to avoid it. If you kill all the trash, the water around Lurker is superheated, and does 500 damage every couple of seconds. If you don't kill the trash, the water has these crazy fish which will kill you very fast. There's also a phase with naga adds. It's a control fight more than a burn fight.

I really hate trash respawns though. The trash respawned after a few attempts, while we were still on Lurker's island. So we did this very complicated warlock summoning chain to get back to the platforms where the trash were and killed them again before finally downing Lurker.

Seriously, Blizzard, trash respawns are a terrible mechanic. Just let us work on the boss in peace and at our own pace. Heck, because of respawns we stretched the raid out an extra hour, just because we were so close. If the trash hadn't respawned, we could have killed Lurker and ended the raid on time.

Most guilds have their time constrained by outside, non-game factors. Adding extra time constraints in-game is unnecessary. The elite guilds who don't have outside time restrictions don't really care about trash respawns, and it's been shown to have very little impact on them. So why punish the non-elite guilds like this?
Posted by Rohan at 12:02 AM