The recent news that Lord of the Rings Online is going Free-To-Play, and being supported by a cash shop instead of subscriptions has reignited the debate over the two payment methods.

Before I post about LotRO specifically, I'd like to talk about the underlying issues as I see it.

In every hobby, different parts of the potential audience are inclined to spend differing amounts of money. For example, take Collectible Card Games such as Magic: the Gathering. You have some people who purchase a couple packs a month, some who purchase several packs a week, and a few who buy boxes of cards at a time. In theory, by having a variable amount that can be purchased, the company does not "leave money on the table", and gets the maximum income it can.

The following graph shows how the income from the two forms compare against each other.

Note: Not real numbers, just hand-waving to get the idea across. 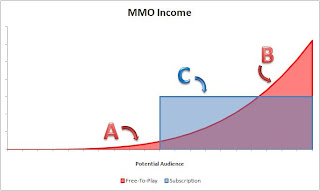 However, what people are inclined to pay--their "rest state" of spending--is not the same as what they will pay. If the only way to play the game is to buy a subscription, a lot of the audience will pay up. That's what Section C represents: the extra income that a subscription can extract above inclinations for a specific part of the audience.

Now, I don't have any access to any real world data about what the actual size of A,B and C are. This is just punditry. However, I think that the F2P companies are gravely under-estimating the size of Section C.

In my opinion, the gaming/scifi/fantasy subculture is terribly "penny-wise, but pound-foolish". We will talk a good game about paying up, but the vast majority of us won't pay unless forced to. We will come up with all sorts of excuses, but will try and evade payment by any means necessary, legal or illegal, and even take pride in it. No matter that it leads to the destruction of the companies involved, or the cancellation of shows or games that we enjoy.

If the game is good, and the subscription reasonable, I think Section C will be significantly larger than Sections A and B. In fact, I don't think Section A actually exists, and the F2P companies will end up depending on a very small, but high-paying segment to survive. Which is an unstable way of life for the company, and is often not too healthy for individuals in that small segment. For every millionaire tossing wads of cash at the item shop, there's an addict spending money she can ill afford to waste.

That's why I think that subscriptions will put a game on a firmer, more stable financial footing than cash shops, even if they do leave some money on the table. Of course, your game has to be of a certain quality to make subscriptions viable, and that's where most companies seem to be falling down these days.

(LotRO is a special case, in my opinion, which I will discuss in a later post.)
Posted by Rohan at 9:06 PM