In the last post, I discussed what I see as the economics of Free-To-Play versus Subscription games. Here is my reasoning on why Free-To-Play may be more more understandable for Lord of the Rings Online than most other games.

First off, you cannot discount how the DDO resurgence went. DDO was a dying game, and looks to have been revitalized by it's move to F2P. I's debatable how much of the revitalization was due to F2P, and how much was due to the fact that Turbine spent a fair amount of effort improving the game, and that the massive publicity of going F2P got enough people to take a second (or first look at it). But regardless, if a suit sees that income increased by 500% (increasing small numbers always looks impressive) after going F2P, then of course she's going to assume that going F2P will have a beneficial effect on the other games.

However, I think the more compelling economic reason for LotRO to go F2P is their Lifetime Subscription program. By all accounts, it's been reasonably popular. But Lifetime Subscriptions aren't always profitable, even after accounting for the time-value of money. If we assume a 10% annual rate of return, a $300 Lifetime Subscription is worth roughly 22 months, or slightly over 3 years, of a $15 subscription. After that, the company is essentially getting no money from those subscribers. And Lord of the Rings Online was launched just over 3 years ago.

So I think that LotRO's income chart now looks more like this: 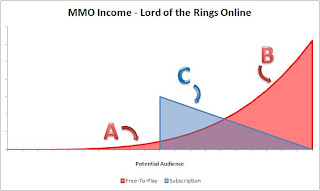 The higher the inclination to spend money, the more likely the customer is to have purchased a Lifetime Subscription, which has now run its course. So Turbine is actually getting the least money from the people that should be giving it the most money!

And because Lifetime Subscriptions are implicitly pitched as "You never have to pay again!", it's much harder politically to introduce things like Star Ponies. The Lifetime Subscribers have a reasonable expectation that they don't have to pay for anything, and the optics of the situation just look bad. But in a wholesale revamp of the payment model, such problems are greatly diminished.

So the real advantage of LotRO going F2P is that the Lifetime Subscription gets converted into a monthly subsidy of Turbine Points. This frees up all those people in Section B to to follow their natural inclination and spend more money on the game. They don't have to spend more, but they can, and because they are inclined to, they probably will. They may spend a little less because of the subsidy, but it's much better than getting nothing from them as Turbine would otherwise.

I think the real lesson to draw from this situation is that Lifetime Subscriptions aren't really a good idea for MMOs. If the game is good, you can count on people playing for a fairly long time. Lifetime Subscriptions only make sense if you think that people will stop subscribing before the break point. I'm not sure that is a good assumption for anyone with a decent MMO to make.
Posted by Rohan at 8:26 PM