I am really enjoying TERA so far. It's a great deal of fun.

I adore combat as a Lancer. Bringing your shield up to block at just the right time, taking no damage from a big hit, is awesome, especially with the visual feedback provided. Blocking a huge monster as it does some sort of bullrush attack, pushing you backwards as you take the hits on your shield, taking no damage, makes you really feel like a tank. Chaining combos together is also neat, and the animations make combat very visceral.

The thing I like about PvE combat in TERA is that it is very interactive. In WoW and most other MMOs, what your opponent is doing doesn't really matter, aside from maybe interrupting or stunning. You go through your rotation, and the mob dies. TERA really encourages you to pay attention to the mob, to watch for the tells and block or dodge.

The game also performs very well, and is very responsive. The game is colorful, and feels fun and full of whimsy.

I also find some of the design and art decisions hilarious.  Here's my Lancer with shield and lance at the ready. Looks pretty awesome, with a great shield design: 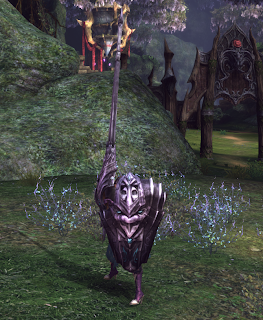 Now here she is showing her armor: 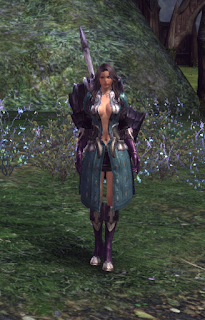 The armor is just hilariously bad. It's like it's giving the monster a target to aim for. But somehow, instead of being annoyed at the armor, it just amuses me greatly.

Now, TERA has it's downsides. The questing is very old school, and is just an excuse to kill a new set of mobs, rather than tell some sort of important or memorable story. The writing is not particularly good either. It's decent, and occasionally very funny (sometimes intentionally, sometimes not, and sometimes it's hard to figure out if it's intentional or not).

Some of the subsystems are unnecessarily complex. For example, enchanting a piece of armor requires another piece of the same slot of roughly equal item level as a raw material. But for some reason, you can't put many items in your bank. So I'm carrying around a dozen chestpieces just in case I need to enchant a new chestpiece.

There are also some interesting design decisions as well. For example, gathering materials gives you a small random buff, rewarding you for making gathering part of your questing and combat routine. For some reason, I absolutely love this feature. It really does not make a big difference in questing, but it just works for me.

As well, I really like how they are handling the launch rush. There are queues on some servers. But TERA has server transfers implemented, and the transfers will be free for the first little while. So even if your preferred server has a queue, you can start a character on a different server and eventually transfer over once everything gets sorted out. This strikes me as a really good balance, allowing the population to flow from server to server in response to the changing conditions of launch, without heavy-handed dev intervention.

As well, for some reason area chat seems to be hopping. Maybe it's because it's the RP server, maybe because the chat box can display more than three lines, or there's less system spam. But whatever the reason, it's a very nice change from the quietness of most recent MMOs.

All in all, I'm really enjoying TERA. It seems to strike this nice balance of being "different enough" from most WoW-like MMOs, while not being too different.  I definitely recommend the game so far, and think it's well worth the initial box price.

Edit: Another small thing I like is that the quest tracker has a button to track or untrack by area. So you can easily swap up your quest tracking when you change areas.

Also, to continue the inappropriate armor screenshots, I got a blue armor piece from the end boss of the first dungeon. I really don't know how TERA will top this: 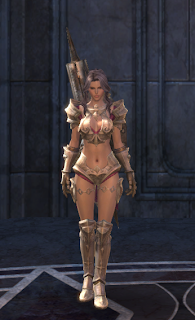 One thing I do like is that the character's hairstyle changed, to adjust to the new armor. That was a nice touch.
Posted by Rohan at 7:25 PM