Reasons for the Backsliding in Portrayals of Women

I've noticed that several game bloggers have seemed despondent due to the notion that the game industry is backsliding on its portrayal of women. I don't think they're wrong that this backsliding is happening, but I don't think they understand why it is happening. Because they are supremely confident in the righteousness of their cause, a lot of these bloggers seem have written off the other side as unrepentant misogynists, and have not taken the time to understand why the game companies are acting as they are.

In my view, people are basically rational. They have underlying reasons that drive the way they act. Sometimes the reasons are illogical or not the best reasons, but they are reasons none the less. So what is the reasoning of many current game companies?

Let me illustrate what I think the underlying reason behind much of the backsliding through an example. Here is Trion's poster child, Crucia, for their upcoming RIFT expansion, Storm Legion: 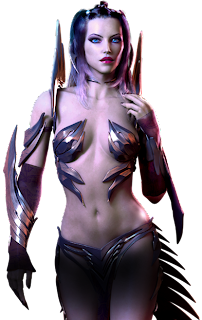 Crucia is front and center on all the expansion materials. Her depiction is obviously going to upset or annoy most feminist gamers. Trion has to know this. So why did they go this route?

Here's a question for you. If a game company publicly says that they are looking to expand into the female market, to attract more female players, which of the following is more likely:

Or
If we are honest, we know that the Option 1 is more likely in both cases. Those ideas may or may not attract female gamers in reality, but we know which direction a game company is going to go in when they say they want more women.

Because this causal relationship is real, the reverse signal works as well. A signal that the company is slightly female-unfriendly is also a signal that the game will emphasize difficulty and more hardcore elements like PvP.

Back to Trion, who is their biggest competitor who is also launching an expansion this year? That's right, World of Warcraft, with Mist of Pandaria.  So Trion is setting up a very stark contrast: fluffy pandas vs Crucia.

It's all about signalling. In the past few years a lot of game companies have chased the casual and female markets, very often by watering down difficulty and other game elements that the dedicated gamer playerbase enjoys. The change in the portrayal of women for many game companies, including Trion and a lot of the companies at E3, is a signal that the game companies are refocusing on their base, and are implementing mechanics that the base enjoys. It is also a signal that the company is focusing on an older audience, rather than trying to attract kids.

It is a clumsy signal, in my view. It risks alienating players who would otherwise try the game. But I think it is an effective signal--not to mention that it does attract the male eye--and that is why a lot of game companies are employing it today.
Posted by Rohan at 10:50 PM