I've pretty much been "Diablo'd out", so I've gone back to TERA. I'm still chugging along the lower levels, up to 38 now. Here are some thoughts, in no particular order. 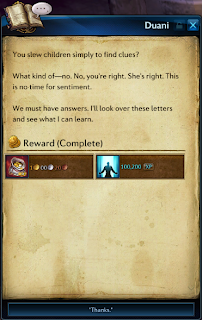 Both of these options are for the North American version of the game. The European version is run by a different company. (Frogster, I believe.) I've heard that the latency for Europe to NA is not that bad, at least for a trial. Of course, if you make characters on the NA servers during the trial, they won't exist if you sign up for the Euro version.

The one on the left is really terrible, but the one on the right is surprisingly not bad. Though maybe my standards have just been battered down.