You know, I'm rather glad I'm not in a raiding guild at the moment. There's no pressure to level, to get to max level as fast as possible so the guild can start raiding. I can play a little bit, then log off, then play a bit more later. Plenty of time to stop and smell the cherry blossoms.

I've hit level 86 and am about 75% of the way through the first zone. The first half of the zone was very much  the faction intro quest, and the second half is more of "Introduction to Pandaria" where you show off the pandaren culture and meet the inhabitants of the continent.

The second half is structured as a "spoke-and-wheel" sort of idea. There's a central hub, and it sends you in multiple smaller quest hubs in several directions. You can do these smaller hubs in any order. I think one of the hubs is the "main quest line". I think this spoke-and-wheel setup is a lot better than Cataclysm's linear model. It feels more sprawling and gives the separate parts of a zone a more distinct flavor.

I'm also enjoying the new Retribution model. Most abilities give Holy Power, and Inquistion/Templar's Verdict use Holy Power. It's a much tighter loop, and is a lot of fun. As well, Divine Purpose is pretty hilarious when it procs off itself. I've managed to chain 4 Templar's Verdicts back-to-back. It's just awesome when RNG goes off in your favor like that.

A final observation, the introductory quest plate armor is very good looking. It's a white/lightish set, and is very clean, elegant, and functional. Not very a lot of bells and whistles, but just gorgeous. 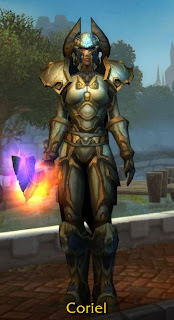