This NPR story, When Women Stopped Coding, has been making the rounds in tech circles.  Its main thrust can be summed up with the following graph: 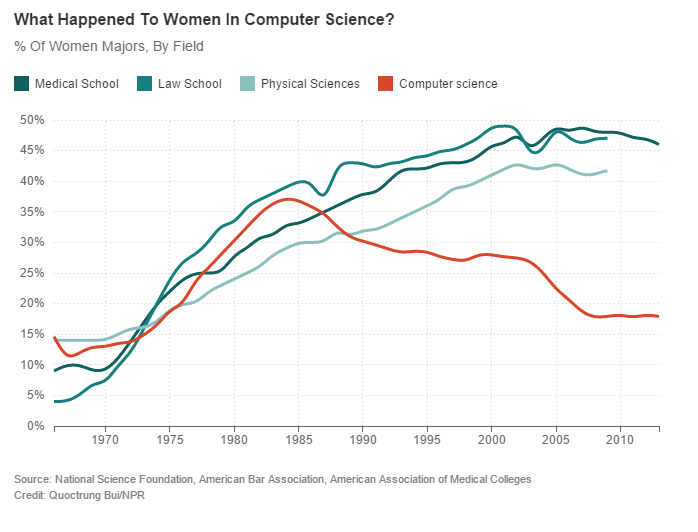 The given explanation by NPR is cultural. As they see it, computers started being marketed towards boys, driving the girls out. This is the pretty standard explanation whenever someone discusses the disparity between the sexes in computer science.

However, the data they use for the graph is essentially "percent of a percent". As you know, I loathe this type of data. So I went to see what the raw data from the National Science Foundation says:

In my view, the raw data tells a different, and perhaps more interesting, story.

Essentially, the story of computer science for both men and women is that there were two bubbles. One around the year 1980, and the other around the year 2000.[1] Which maps to what happened historically. Although women are always less represented, both curves follow somewhat similar shapes. The major difference though, is what happens around the peak of the bubble.

First, in the two or three years right before the peak, a lot more men jump into the program than women. More women enroll, but there are even more men who look to join in. Women seem a little less inclined to flock to the newly "hot" programs.

Second, and more importantly, the bust right after the peak absolutely devastates female participation in computer science. The first time, in the 1980s, female degrees drop to less than half of their high point, while male enrollment only falls by 30%. The second time is even more destructive for women. All the gains from the boom are wiped out, and female participation falls back to the steady state before the boom. Male participation drops, but again, it doesn't drop all the way back down.

My interpretation of the data is that less women participate in computer science not because of cultural reasons, but because of economic ones. My hypothesis would be that more women avoid industries that are perceived to be "unstable", or have significant economic downturns, even if the industry is lucrative during boom times.

To be fair, that's a reasonably sensible position. I was in university when the last tech bubble burst, and it was a terrible time to hunt for work. I can only imagine what a high school student is thinking when they see the obliteration of large tech companies like Nortel on the news.

[1] You choose your program roughly four years before you get your degree.
Posted by Rohan at 10:19 PM