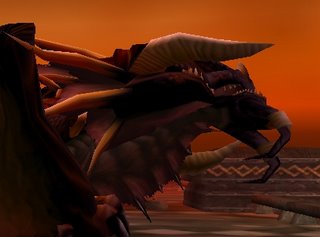 I've been killing a lot of new bosses these last couple days. Yesterday we downed the Prophet Skeram in AQ40, and got in some attempts on Battleguard Sartura. Today we blew through Blackwing Lair, one-shotting every boss up to Nefarian. Nef himself took two attempts, but he went down nicely on the second one.

Of the new fights, the Nefarian fight was probably the best, followed by Skeram. Vael was pretty interesting, but I got Burning Adrenaline fairly early and died. I was sad that Vael did not do the "Forgive me Coriel, your death only adds to my failure" line, as I probably died too close to an earlier death. But still, it's a neat fight, and I always like fighting dragons.

As for Nef, it's fun being a paladin. I don't have an Onyxia Scale Cloak, but I survived the Shadowflame with a bubble. Also, the paladin class call is a joke. So we stop fighting for a few seconds, it's not that much of a problem. Nef should Hammer of Justice the main tank or something. That would be funny.

Also, I got to melee-heal a fair bit in the last half of BWL: Ebonroc, Chromaggus, and Nefarian. Meleeing on Chromaggus in particular is very helpful, as JoWisdom helps keep the mana up for Cleanse. We had the Timelapse/Corrosive Acid breaths. I really wish I had a single point in Lasting Judgement, though. It would make keeping up Judgements so much easier.

So far, my verdict on BWL is that it is extremely melee-friendly for paladins, as is Skeram and everything up to Sartura. The Sartura fight itself, I'm not so sure about. Paladins meleeing with Seal of Justice, and HoJ rotations might be a good idea, at least on Sartura herself. The AoE from the adds may be too much. Most strats I've seen keep the rogues off the adds, and if the rogues don't go in, it's probably a bad idea for the paladins to. In any case, I think it was only the guild's second attempt at her, so we were basically just learning how the fight works.

Of course, I predict responses saying that paladins should not melee in anything beyond Sartura. It's amusing how the "Paladins Should Not Melee" parts of this game always coincide with the parts I have not done yet. :)

Ah well. It's been a fun couple of days. Hopefully I'll get a chance to kill Ragnaros sometime soon.
Posted by Rohan at 11:25 PM