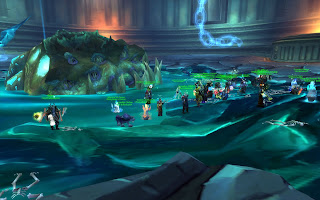 We finally got Yogg-Saron down on Wednesday this week. It's a really nice fight. It's all about directing the right amount of DPS at the right targets at the right time. It's odd, but it took us a fairly long time, at least compared to the rest of the instance, much to the dismay of our raid leader.

We were having a lot of problems with phase 1, but on Wednesday it just clicked and we nailed Phase 1 perfectly on every attempt. After that, it was just a matter of deciding how much DPS went towards adds and how much went towards Yogg-Saron. I think part of our success may have been that we took two 10-man groups through Ulduar-10 last weekend, and both groups beat Yogg, thus helping us understand the fight in its entirety.