I picked up Champions Online a couple days ago and have been trying it out since. I haven't gotten very far, but here are some first impressions. I've never played the other major Superhero game (City of Heroes/Villains) so I have no idea how this game compares to that.

The character creator is very powerful. The first character I made is Cassiel: 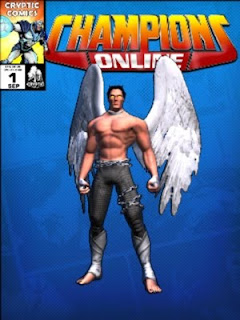 The inspiration for Cassiel should be fairly obvious. I took the Supernatural template and Flight travel power. It actually works very nicely. Cassiel uses his fists and chains as weapons. Oddly Cassiel looks better in-game and flying, even at the lower resolution I play at: 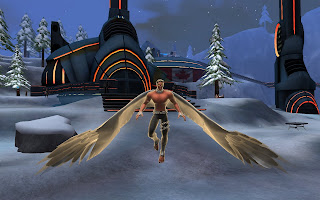 The second character I made is Rake. I made a Regency noble, but made her female: 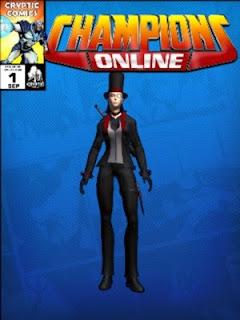 Rake is a Single Blade swordswoman, with the Acrobatics travel power. She's a lot faster and seems to do more damage than Cassiel, but is a lot more fragile.

You can make a lot of different looks with the character creator. It's very powerful. There are lots of interesting characters being made. For example, I teamed up with a machine-gun-toting rat who travelled underground for one quest. Probably half the fun in the game is making new heroes.

The comic book covers are actually generated when you save a costume in the character creator. That's a very nice touch.
Posted by Rohan at 12:24 AM