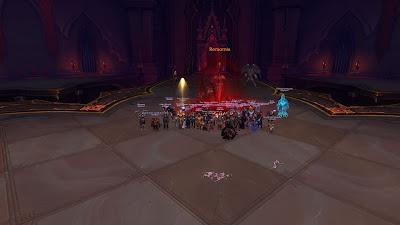 The Stone Generals took us about 3 pulls. Surprisingly quick, compared to Sludgefist. Not a particularly clean kill, I think we stunned the tanks and one of them died. So our other tank had to tank both for the last few percent.

This was a pretty cool fight. We struggled a lot on the first phase, until we healers settled on a healing CD rotation and managed to stabilize it. We had 3 healers rotate CDs on the adds, and a druids use Tranquility after each Pride attack.

The second and third phases were much easier in comparison. Our only problem was that four or five of our hunters were Beastmaster, and their pets couldn't reach the ranged adds. We did cut it close, actually getting a second Heroism in, and Denathrius had shattered all four corners so we killed him while standing on the bad zones.

All in all, it was a pretty good raid. I'm looking forward to starting Heroic eventually. Maybe as soon as next week, if we manage to clear quickly enough.