I got into an AQ20 run with the prospective guild today. They had already cleared the first couple of bosses, so we pretty much went straight to the final boss, Ossiran the Unscarred. Ossiran is a really cool fight.

There are these crystals which weaken him which spawn in semi-random places in the room. You have to have someone find the next crystal, then the tanks drag him to it, and activate it before he goes into supreme mode and wipes the raid. Everytime you weaken him with a crystal, he becomes extra vulnerable to a specific type of damage. (There are also whirlwinds flying around, but I'm not really sure I understand what that was about.)

It's a cool fight because there is a lot of running around. The raid is constantly trying to keep themselves between Ossiran and the next crystal. It kind of reminds me a bit of Warsong Gulch, and the way you need to heal the flag carrier as she runs past you.

Quite honestly, I love the 20-man zones. Blizzard really outdid themselves here. If the expansion was all 20-mans, with this level of quality, I think this would be the perfect game. It's especially good for hybrids, because there's a lot more opportunity to shift roles. I did some judging, some melee, and some healing (though mostly healing on Ossiran).

Oh, and I got epix! Ossiran dropped [Mantle of the Horusath], and I won the roll! I love getting loot the first time I beat a fight. Somehow it makes it more special.

Honestly, these days are what make WoW fun. An interesting fight, the thrill of victory, and mad lootz. What more can you ask for? 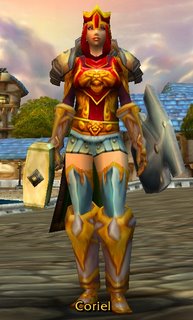