Actually, I don't really have a whole lot to say about grouping through the Dungeon Finder. It's pretty much been, in the words of Scott Jennings, "Bam! Loot! Dog!" 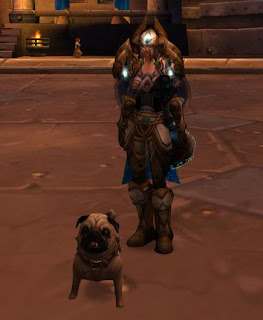 In any case, I'm sort of surprised at seeing some of the negative stories about Dungeon Finder groups going around. Pretty much all of mine--knock on wood--have been successful. No comments about low DPS, no snarkiness or elitism, just clean and competent groups.

This includes heroics run on Coriel and Valarin, as well as low level dungeons run on a couple alts. Maybe they've been somewhat quiet, but everyone says "Hi" at the start and "Thank you" at the end, and really, what more can you ask for?

There have really only been two negative happenings. In one Culling of Stratholme, two DPS ran ahead and died, so the tank ditched us in the middle of the waves. I ressed them, the DK switched to tanking gear, and we carried on until we got a new tank from the Dungeon Finder. We even made the Drake Timer (albeit just barely, with literally seconds to spare).

The only other place that regularly has problems is Gnomeregan. And that's mostly because it's Gnomeregan. Low-level, long, a confusing layout, with somewhat rapid respawns: it's a recipe for unsuccessful runs.

Even Oculus isn't that bad. Speaking of Oculus, I've never found it difficult, but I do find it a bit annoying. It's very start-and-stop. You get on drake, fly a few feet, and get off the drake. Rinse and repeat again and again. I wonder if it would have been a better instance if it had been more like Malygos. If you spent the first half running around, and then the last half entirely on dragonback, rather than switching all the time.

Still though, the Dungeon Finder has been very successful and a lot of fun for me so far.
Posted by Rohan at 8:14 PM