I've been playing Tera Online over the last few weeks. It's pretty interesting to see what they've changed.

They've streamlined leveling a fair bit. You just follow the main story quests and you don't have to do any of the zone quests. The story quests give you armor, and special relic weapons drop at certain level ranges which gives you a good weapon. Monsters are a bit easier to defeat while leveling. Most leveling dungeons have been repurposed for 3-people of any class, rather than needing a tank or healer.

I leveled a Castanic Valkyrie to 65, the start of current content. The Valkyrie is a spear-wielding class with several AoE moves, so her combo chains have lots of spins. She also builds combo points on enemies, and detonates them for large amounts of damage.

For the most part following the story quests worked well, though there were a couple of points near the end where they ended up in a dungeon for which I had outlevelled the instance finder, but was tedious to solo. That was fine for the most part, I just went back and finished up when I reached 65.

Technically, 65 isn't the cap, the real cap is 70. But apparently it takes weeks to level up from this point. Current content is a long grind, I guess.

For the most part, I really enjoyed my time in Tera. I still think the combat is excellent. The stories were not exactly good, but they were fun in a cheesy way. It was nice to see the conclusions to all those stories I started so long ago.

If you treat it as kind of a quasi-single-player game, levelling a character to 65 in Tera Online is a lot of fun. I don't know if I'll continue playing, or if I will try out a new character, but I really enjoyed the time I spent in the game these last few weeks.

In any case, here's the highlight of all Tera Online posts. Let's see what sort of ludicrous armor my character has to wear. Actually, I find this the most hilarious part of Tera, seeing the different, shameless, armor styles. Here's my Valkyrie in her current armor (from the login screen): 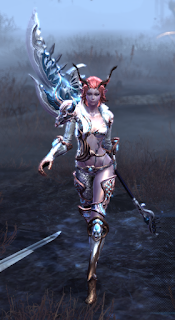