I finished off Howling Fjord a couple days ago, hitting 74 in the process. Thus far I'm pacing about 2 levels a zone, which is a pretty good rate.

Howling Fjord is a really good zone. Borean Tundra was a good zone too, but in a lot of ways Borean Tundra represents "pop culture" WoW. There were a lot of fun quests, and in-jokes with D.E.H.T.A. and the gnomes. Heck, there was a quest to make wolves poop. The magic quests are closer to the "technological" feel of Warcraft magic, rather than the mythic feel (very shields and sensors sort of imagery). Even the regular quests were very much in line with WoW 1.0, but superbly polished. There's nothing wrong with Borean Tundra, but it's very much the WoW we know.

Howling Fjord, on the other hand, "echoes" a bit more. The Vrykul storyline touches a lot of real world mythologies, from the obvious Norse flavour to King Arthur (the sleeping king) to the Nephilim of the Judeo-Christian tradition. In particular, the quests to go into the spirit world and see history are superb, especially the way the Lich King is integrated into the first one.

The story is more martial, and there are fewer pop culture jokes. There is a greater sense of wilderness, especially with the homesteaders in Fort Wildervar. As well, Howling Fjord throws you into the fight as soon as you arrive, and that makes everything seem more immediate. The music is awesome, and perfect for the zone.

Plus, there were pirates. And Tuskarr. I love the Tuskarr, their voices are just perfect. The quest to get the reef cows to mate (after you kill Big Roy) is hilarious. The pirate quests were very funny, especially the elf-loving pirate and his girlfriend. But even the pirate and Tuskarr quests had that strand of death and loss running through their quests.

Blizzard did a superb job with Howling Fjord.

As an aside, you ever notice that dwarf quest-givers are crazy? It's sort of unexpected, because you expect them to be level-headed and down to earth. You see a gnome with a quest, you know it's going to get really weird. Humans will give you solid, traditional quests, and Night Elves will give you hippie save-the-whales or deeply tragic quests.

But dwarves give you quests that start out normal and sensible, and yet somehow you end up like this:

Dwarf Lieutenant (after several perfectly reasonable Vrykul quests): Navigating the steep bluffs of Howling Fjord can be nerve-racking! I've come up with a solution to ease that burden by utilizing vrykul technology and dwarven ingenuity. 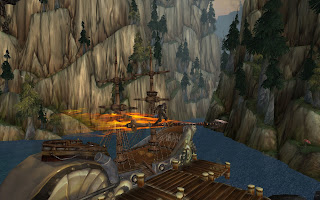 Guard Captain Zorek: You are insane, Coriel! What kind of degenerate would actually launch themselves from a harpoon gun as a method of travel?